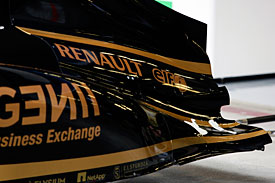 Renault is to lodge a request with the FIA to expand its engine supply deal to four teams in 2012, AUTOSPORT Magazine has learned and published on their website, as talks with potential new partners – including Williams – enters an advanced stage.

The French car manufacturer already supplies Renault, Red Bull Racing and Team Lotus, but is keen to add another team to its roster for next year.

And with discussions about a deal looking promising, Jean-Francois Caubet, managing director of Renault Sport, has revealed that contact will now be made with the FIA to seek permission for a fourth supply deal for next year.

Under the current regulations, a manufacturer is only allowed to supply three teams, but it can expand on that if it gets permission from the governing body.

“The goal is to have more teams next year,” Caubet told AUTOSPORT. “We want to have four teams but we need to have the approval from the FIA, because the limit is only three.

“We plan to write [to the FIA] as soon as possible – although we must have stability between ourselves, [other customer suppliers] Cosworth and others.”

Although sources suggest that the most likely new deal could be with Williams – either for 2012 or 2013 – Caubet insisted that there were other possibilities too.

When asked that the state of talks with Williams, Caubet said: “It is not only them.”

Williams has a deal with Cosworth until the end of 2012, but is understood to be evaluating its options – especially with the major overhaul in engine regulations for 2013 on the horizon.

Renault is keen to expand its customer supply deal because it wants to have as big a platform as possible for the new 2013 engines – and it believes it needs to start forging partnerships immediately with those partner teams that it will be working with when the 1.6-litre turbo charged units come into form.

“We are focusing on our 2013 work [with the teams], and the problem is that if you do not do that now, then you will never do that,” said Caubet. “That is not only a problem for the strategy of Renault.

“We are fully focused on the 2013 engine, and the key element now is to start working on a technical level with the teams – and we are doing that.

“We know there are a lot of politics around, but we have such a big commitment about the 2013 engines that there is no question, no question. We are now working with the teams.”

When asked if a possible delay to the introduction of the 2013 engines would be a problem, Caubet said: “If it was a delay it would be never. I told everybody, even Bernie [Ecclestone]: if you say 2015, you may as well say never.”