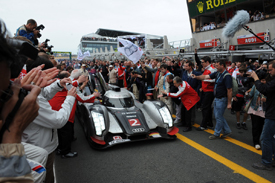 Benoit Treluyer, Andre Lotterer and Marcel Fassler won the 2011 Le Mans 24 Hours at a very necessary gallop for Audi, hounded throughout by Peugeot rivals that had to stop less often.

The #9 908 of Simon Pagenaud, Sebastien Bourdais and Pedro Lamy crossed the line 13.854s behind the Audi, and had the R18’s drivers not gone flat out throughout to make up for their car’s marginal deficit in range this race could easily have gone the other way.

For fans of statistics, this is the fourth closest Le Mans finish of all time, all will certainly go down as one of the classics.

This was a Le Mans packed with – and marred by – incidents, two of which accounted for the withdrawal of front-running Audis, both involving entrants from the GTE Pro class. At a track forever associated with the worst racing accident of all time, such incidents never fail to shock.

Allan McNish crashed out in the first hour having executed a daringly opportunistic overtaking move on his Audi team-mate Timo Bernhard; his trajectory, however, took him into a gap that was rapidly narrowing as Anthony Beltoise in the Ferrari ahead of them exercised his right to take up the racing line.

Beltoise never saw McNish coming, it being not a good idea to turn in to a corner while looking in the mirror.

Eight hours in and Audi lost another car, this time when Mike Rockenfeller blasted past Robert Kaufmann’s #71 Waltrip Ferrari at the kink between Mulsanne and Indianapolis, and ran out of road.

Rockenfeller’s accident in particular brought the events of Le Mans 1955 to the forefront of the mind, demonstrating afresh the terrifying consequences that ensue when a slower car lurches into the path of a frontrunner at full chat. When one car hits another at a speed not far off 180mph, the forces that are unleashed along random trajectories defy belief; the wheels, suspension and outer skin of Rockenfeller’s Audi shattered with horrifying ferocity as he hit the crash barrier.

It is a testament to modern safety standards that the R18 protected its occupant from an impact of considerably higher magnitude than any crash testing regimen demands.

There will be inevitable calls for a review of driving standards. Kauffman, co-owner of Waltrip Racing, has some experience in GT racing but very little at Le Mans. At the time of the accident he was coming to the end of only his second lap in the darkness of Saturday night. He believes he did not ‘shut the door’ on Rockenfeller; replays from the Audi’s in-car camera shows that while he may not have done that, he certainly adjusted his line.

The fact is that he had no idea how fast the Audi was coming or from which side it would attempt to pass him. All he knew was that it was there, its presence signalled by an array of headlamps which (according to several GTE drivers) are strong enough to strip paint. Perhaps those who sit in judgement should experience a GTE car for themselves, at night, on cold tyres, with no central rear-view mirror.

From the off, this was a race of tightly bunched battles at the head of each class. 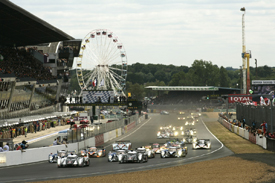 Treluyer led away from pole in the #2 Audi R18, followed by Bernhard and the Peugeot of Franck Montagny, then McNish, Bourdais and Wurz. Treluyer actually overcommitted himself at the Dunlop bridge and slid wide, but Bernhard thought the better of exploiting the gap.

Later in the hour he would make a similar error while leading, Treluyer having lost position in the first round of pitstops, and McNish did not have to be invited twice to take up the opportunity.

McNish had been combative all through that opening hour, tigering his way past Montagny in the early laps, feeling that his car – which had been rebuilt following Kristensen’s shunt in qualifying on Thursday night – was in perfect shape.

In mugging his team-mate for the lead he demonstrated the split-second opportunism that is often utterly necessary to win a race, even one as long as this. The crash that ensued was scant reward.

With the #3 Audi eliminated and the complexion of the race changed by the long safety car period that followed while the tyre barrier was repaired, it became clear that the leading LMP1 cars were closely matched and yet had different attributes: the Peugeot was clearly running less downforce and was quick down the straights, and frugal enough to eke out at least one extra lap between stops. The Audi was often slightly quicker over the lap and gripped better in twistier areas such as the Porsche Curves, but could not match the 908 on fuel range.

Audi’s only chance to win was to go hard from the off and extract the maximum life from the tyres so as to minimise the time spent stationary in the pits.

It meant that during the night the lead frequently swapped back and forth between the #2 Audi and the #7 and #9 Peugeots – often circulating together as they fought for supremacy through the night. One particular scrap around 15 hours in, between Anthony Davidson and Marcel Fassler, which saw the lead exchanged twice in two laps, highlighted the relentless intensity of the conflict on the track. 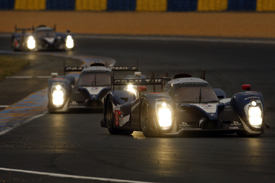 Circumstance whittled the protagonists down to two. The #8 Peugeot lost time in the pits while a broken brake balance adjuster was repaired (in fact, it would have lost more had it not pitted under the safety car), then incurred a penalty because one of the refuellers did not have their goggles in place. Wurz made an uncharacteristic error and ran the #7 into the barrier at Indianapolis in the 19th hour, losing 11 minutes to essential repairs.

The #1 Audi carrying last year’s winners departed in the manner described above, bringing out the safety car for two hours.

As the chill of the night receded, only the #2 Audi and the #9 Peugeot were still in the game, still trading positions occasionally as their pitstop timings diverged, but it was in the morning shift that the race was truly won.

Treluyer took over the #2 R18 from Fassler at 8am and drove flat out – safety car interventions excepted – on the same set of tyres for another three hours and 20 minutes. Then Lotterer took over and attacked again, setting fastest lap after fastest lap. Bourdais, in the #9 Peugeot, counter-attacked but at this point the Audi was incredibly strong.

Rain came and went, and Lotterer simply had to stick it out with the tyres he had. Finally he got a new set in a precariously timed splash-and-dash with just under 40 minutes to run, and then only because the left rear tyre was deflating. He emerged just 20s ahead of the chasing Peugeot. Pagenaud had the wheel of the #9 car during the final stint and he was outstanding, as he had been all weekend, but it was still not quite enough.

Audi Sport boss Wolfgang Ullrich later admitted that the puncture had forced their hand and that the R18 did not have enough fuel to complete another lap.

The Minassian/Sarrazin/Montagny 908 finished third and a lap down, with Minassian at the wheel even though he had suffered headaches and impaired vision owing to a vibration in the night.

ORECA were fortunate not to be ousted from fifth place in the final hours as their year-old Peugeot was beset by problems. The car was held up in the pits during the night, then Loic Duval went off the track as he tried to make up for lost time. 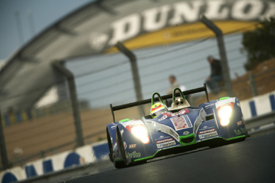 Le Mans legend Henri Pescarolo was back, and once again his cars punched beyond their weight. In Emmanuel Collard, Christophe Tinseau and Julien Jousse, Pescarolo had a driver line-up with no weak links. They were impressively quick, easily the most rapid of the petrol-powered LMP1 entries, and were challenging the ORECA Peugeot for fifth when Collard went off at the Porsche Curves during the wet spell.

It was a far more impressive showing for Rebellion Racing, too, compared with last year. Jean-Christophe Boullion carelessly shunted the #13 car but the #12 Lola-Toyota coupe had an unruffled run to the finish, apart from a puncture which damaged the rear bodywork and a mystery vibration which cured itself equally mysteriously, in the hands of the impressive Nicolas Prost, Neel Jani and Jeroen Bleekemolen.

Alexandre Premat, David Hallyday and Dominik Kraihamer’s ORECA-Nissan set the early pace in LMP2, chased by the Oak Racing Pescarolo-BMW of Jan Charouz, Shinji Nakano and Nicolas De Crem, but they fell by the wayside after showing impressive early pace.

Last year’s winners Strakka Racing also led the class, despite carrying additional ballast, but the car did not last the night. The Greaves Motorsport-run Zytek driven by Tom Kimber-Smith, Karim Ojjeh and Olivier Lombard could not quite match the frontrunners on pace but it outlasted them and its drivers were quick and consistent, which in a class whose ultimate order was largely dictated by attrition proved to be winning attributes.

Assisted by a well-timed stop before the first safety car, the #74 Chevrolet Corvette driven by Oliver Gavin, Jan Magnussen and Richard Westbrook took a lead which they defended until 8am on the Sunday – seemingly Chevy’s bogey hour at Le Mans – when Magnussen crashed out at the Ford chicane while lapping a Porsche. That allowed the #51 Giancarlo Fisichella/Gianmaria Bruni/Toni Vilander AF Corse Ferrari back into the lead, but it also encountered electrical trouble and Vilander had an off late in the race. 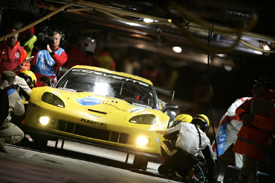 The first safety car had punished the Olivier Beretta/Tom Milner/Antonio Garcia #73 Corvette as much as it had assisted the sister car, and Chevrolet’s cause wasn’t aided when Beretta had a small off-track excursion on Sunday morning, but Milner managed to rope in and pass the #51 Ferrari before lunchtime.

The delayed #56 BMW of Andy Priaulx/Dirk Muller/Joey Hand fought back into contention, dispensing with the Felbermayr Porsche late on Sunday morning, to claim the final podium spot.

The GTE Am class was nothing if not dramatic, and battles between its entrants provided tremendous entertainment throughout the opening hours. Unfortunately many of them lacked stamina, and the Ferrari 458s – glorious-sounding cars in true Le Mans style – suffered electrical trouble and fuelling glitches.

There were also a number of crashes as the gentlemen racers ran out of energy and concentration – sadly this was the fate of the #60 AMR Aston Martin which led the race for several hours through the night.

Larbre Competition’s Corvette and Porsche entries took the top spots on the podium; Patrick Bornhauser, Julien Canal and Gabriele Gardel won in their Chevrolet, with Canal very much the backbone of the driving effort.